By Chris Pleasance for MailOnline

This is the shocking moment a Just Eat delivery driver was caught on CCTV stealing a ginger cat from an apartment building in Paris.

The man was delivering a pizza to trainee attorney Caroline Simon-Provo on Tuesday evening in the west end of the city when the robbery took place. 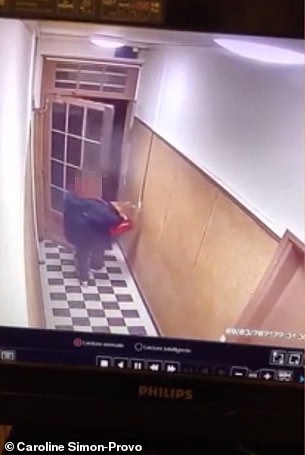 The next morning, when the cat had still not shown up, Miss Simon-Provo said she had decided to review the building’s CCTV camera.

The footage clearly revealed that the driver was leaving with the cat in his arms.

She said the residents filed a police complaint and contacted Just Eat around 8 a.m., but received no response.

She and a friend then went to the restaurant at 10:30 a.m. and waited for employees to show up and confront them.

The employees called their boss, who turned out to have delivered Miss Simon-Provo’s pizza the night before and admitted to taking the cat.

He tried to justify his actions by saying his restaurant had a mouse problem and he intended to use the cat to get rid of them.

Although CCTV clearly shows him leaving the building with the cat, he denied – claiming to have found the feline in the street.

Miss Simon-Provo said she found the “shivering” cat in the corner of the pizzeria and brought it back to the building.

A Just Eat spokesperson said The Independent, who first reported the story, that an investigation has been opened.

The police are also investigating and a formal complaint has been filed.

An American living in Paris has TikTokers wondering how it is possible to live in a 100 square feet apartment. The woman, who goes by the username @shump_has apparently been living in Paris since at least 2021. Her thread is full of observations of her life in the city – where she works as an […]

Report from PARIS – Paris’ deadliest fire in more than a decade killed at least 10 people on Tuesday as flames engulfed a nine-story building, sending residents to the roof and scaling balconies to escape. A 40-year-old woman who lived in the apartment building was arrested nearby and detained on suspicion of starting the fire […]