Are they friends? Kanye West and Jessica Alba dine at a fancy restaurant in Paris at the same time … as Kim Kardashian returns to LA

In January, Kanye West took his fiancee Kim Kardashian to L’Avenue in Paris.

On Sunday, he was seen at the fancy restaurant again, but not with his better half. Instead, the 36-year-old was in the company of another exotic beauty, Jessica Alba, 32.

It was not clear if they were having dinner together, but they were at the fancy place at the same time. The two are in Paris for fashion week, while Kim, 33, is back in Los Angeles with baby North and mom Kris Jenner, 58, after a disastrous trip to Austria.

Scroll down for video

Out for lunch: Jessica Alba was spotted leaving the upscale restaurant L’Avenue in Paris on Sunday 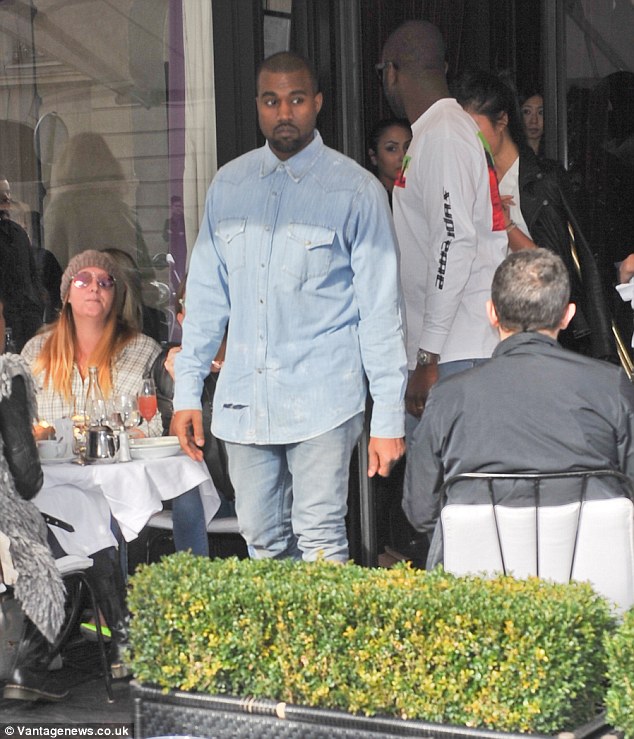 Coincidence: Kanye West was also having dinner at the fancy restaurant he took his fiancee Kim Kardashian to in January 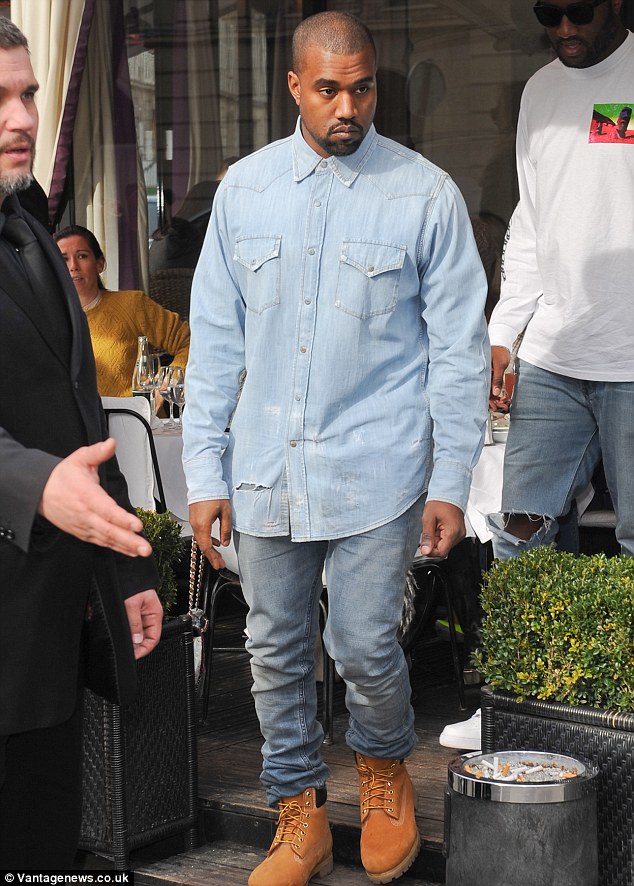 Outside: this fashion-conscious 36-year-old is a regular in the French capital 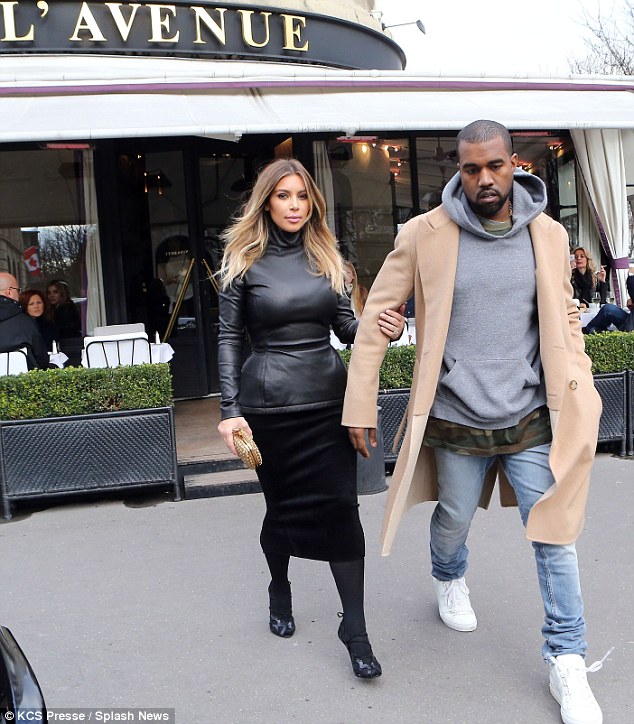 Kim stepped out of the Vienna Opera Ball after blackface stand-up comedian Chris Stephan approached her and impersonated the Gold Digger singer.

Kanye and Jessica might just be friends, since the actress is one of Kim’s companions.

The mother-of-two has worn a slew of stylish outfits over the past week as she attended various designer shows. 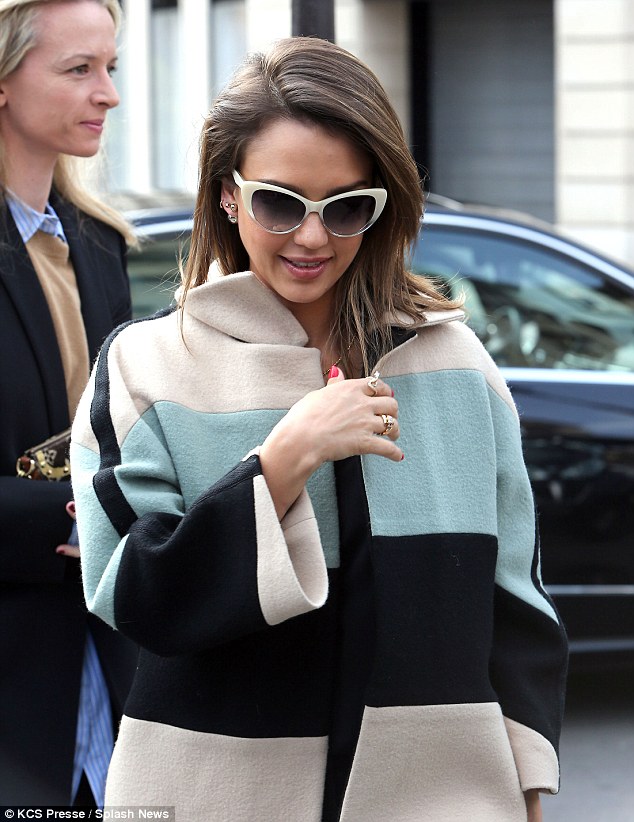 Very chic: the 32-year-old is in the French capital for Women’s Fashion Week 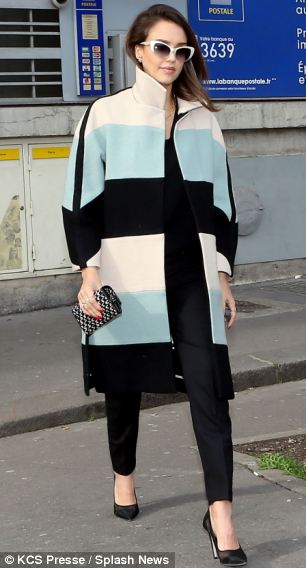 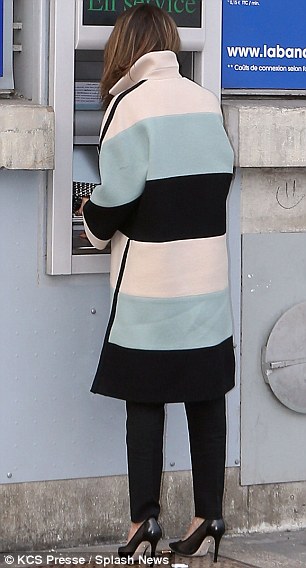 Cashing in: The actress looked stylish in a white, blue and black jacket as she stopped at an ATM for euros

On Sunday, the actress went to lunch in an eye-catching swing coat with wide white, light pink, and black stripes, paired with black pencil pants and black high heels.

The Sin City star accessorized with a beige handbag and cat eye sunglasses.

Her brown hair was swept to one side, framing her lightly made-up face in peach tones. 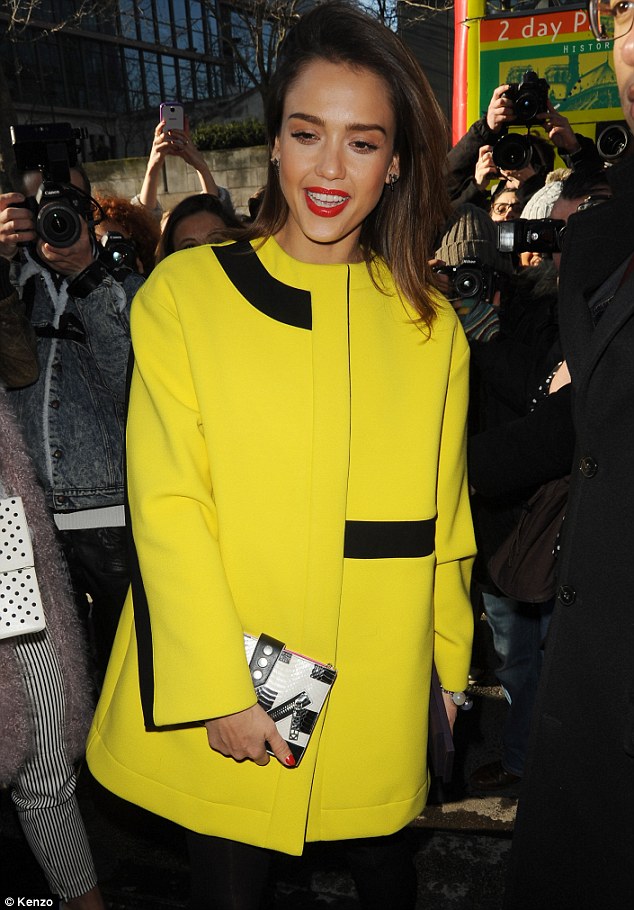 Quick change: The mother-of-two opted for a striking yellow jacket and bright red lipstick for the Kenzo show 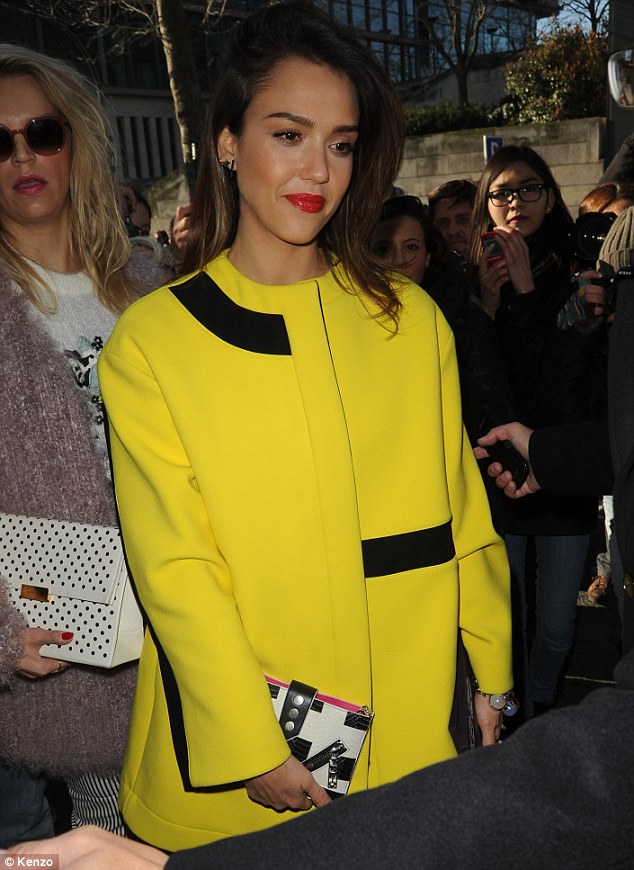 Solo: The brunette left hubby Cash Warren and their daughters Haven and Honor at home

What a star: Jessica looked brighter than ever as she posed for a photo on the steps 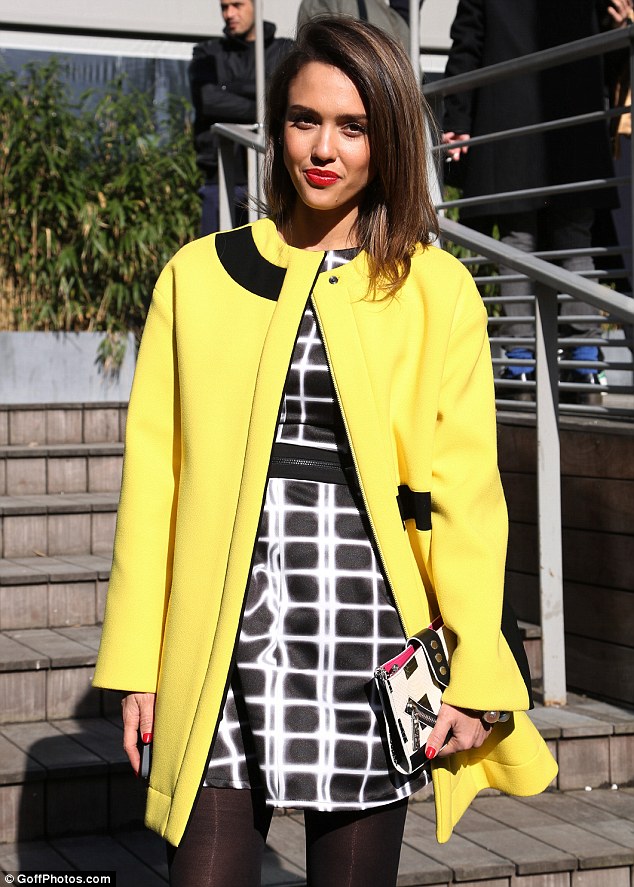 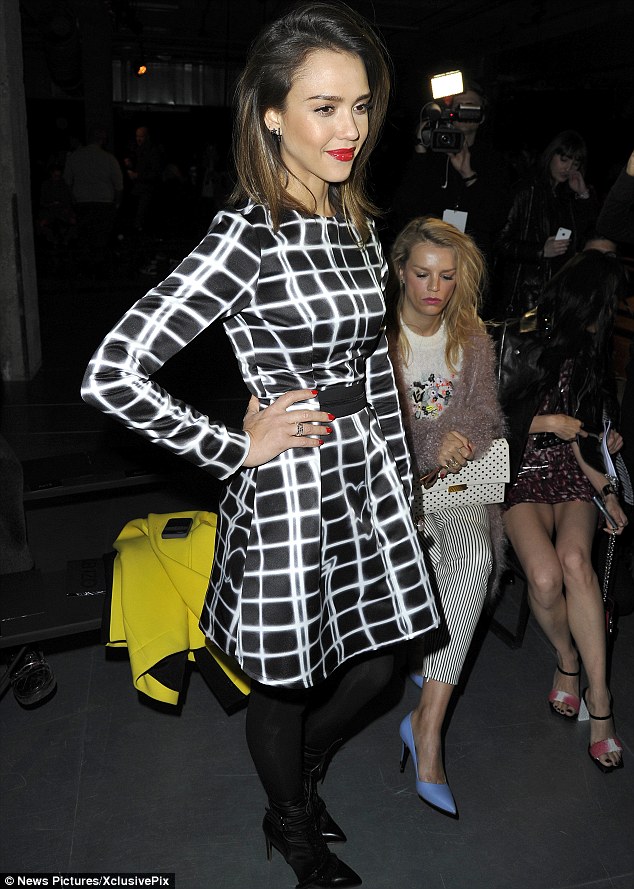 No more coat: The Dark Angel star took off her coat and opted to show off her black and white patterned mini dress on the Kenzo show 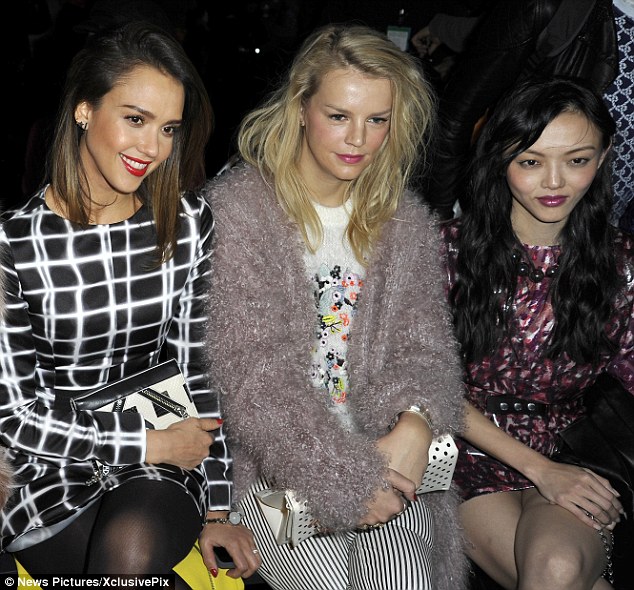 Good company: Jessica was joined by actress and model Rila Fukushima (far right) and other guests at the fashion gala

Jessica returned to her hotel, asking her driver to stop along the way so she could withdraw money from an ATM, to change into a stunning yellow jacket with black details for the Kenzo show. .

She wore the same pants but traded in her purse for a distinctive black and white clutch. And she changed her makeup with bright red lipstick.

Jessica arrived in Paris on Monday without her husband of five years, Cash Warren, and their daughters, Haven Garner, two, and Honor, five. 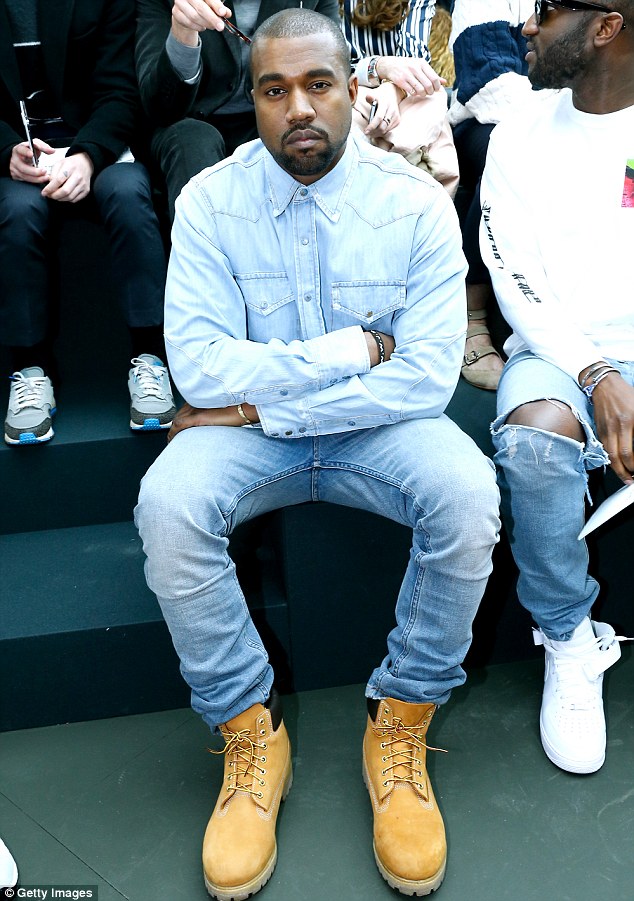 Double denim: The rapper arrived at the show flanked by several bodyguards and dressed in double denim 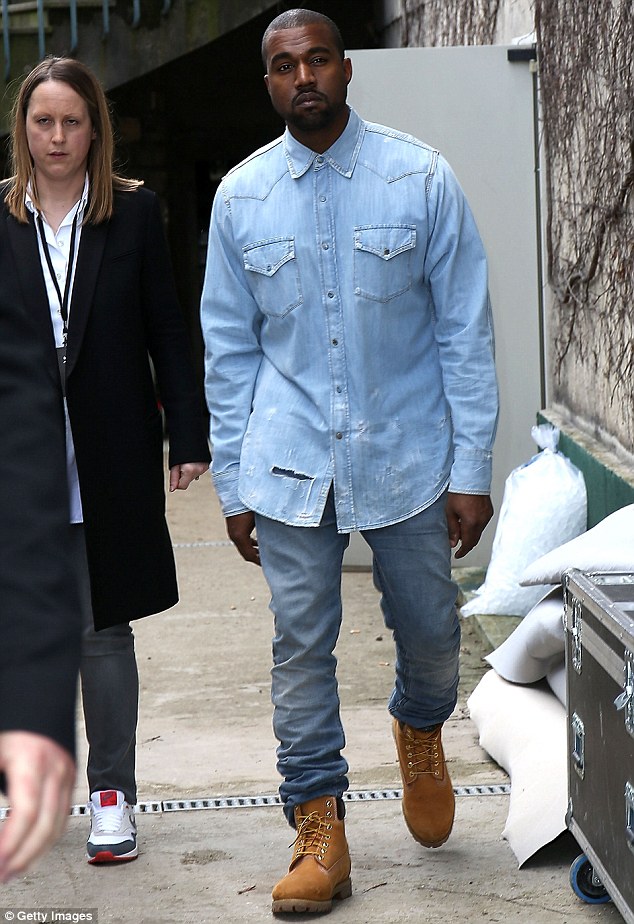 Shabby chic: the star cracked a half-smile as she spotted the media on hold

The star and Kim had lunch at L’Avenue in January when they flew to Paris for Haute Couture Fashion Week.

The collection: the models took Celine’s fall / winter ready-to-wear collection on the catwalk 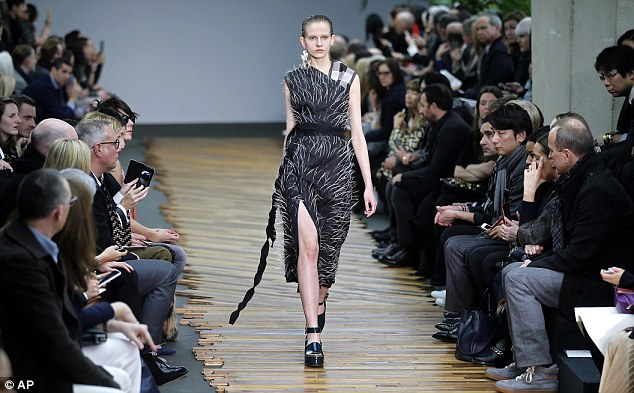 Trend: black and white tones make up the bulk of the collection’s color palette

After many months of struggle and dedication, Parisian residents and restaurateurs Richard and Regina Lee have finally opened the doors to High Cotton Kitchen this year, and they couldn’t be happier with the results. “We got the idea for High Cotton when we were out on our weekly date night,” said Richard Lee, adding that […]

The daughter of a famous Sicilian mafia boss opened a restaurant near the Arc de Triomphe in Paris called Corleone. Lucia Riina, a painter and the youngest child of the late “Patron of Bosses” Salvatore “Totò” Riina, named the establishment after her father’s hometown and the crime family in the award-winning trilogy of Godfather films. […]

The famous Parisian restaurant Drouant has a totally redesigned look

Since 1914, the members of the Prix Goncourt jury have dined and deliberated on the first Tuesday of each month in the same Parisian restaurant: Drouant. The winner of this year’s French literary grand prize was announced on November 4 in the recently reopened 2nd Arrondissement restaurant, redesigned by Italian interior designer and architect Fabrizio […]