Decor, menu and all.

The address alone – rue de Rivoli overlooking the Tuileries Gardens in Paris’ 1st arrondissement – is the first telltale sign that Le Meurice is no ordinary Parisian property. The hotel, part of the exclusive Dorchester Collection, is the kind of place you would half expect to be stuffy and pretentious. With its grand entrance manned at all times by no less than three doormen, the staff are only too eager to help jet-lagged travelers with their luggage or procure a cigarette and a light to uphold a certain “When in Paris”. The reception staff, welcoming and competent, masked and dressed in sharp navy blue outfits, stand ready in the common areas where curious works of art take up residence. Le Meurice, in effect, avoids the expected stereotypes.

A hotel as old as this – it opened in 1835 with the aim of attracting wealthy British clientele visiting Paris – could certainly rest on its laurels. Instead, Le Meurice is rushing full steam ahead into the era of modern travel, inviting loyal regulars to discover new depth and encouraging a new group of young travelers to enjoy Paris’ most spectacular stay. Franka Holtmann, the general manager on the ball, who joined Le Meurice in 2006, is largely responsible for many of the hotel’s changes and major overhaul, a decade-long project (and changes) that , according to Holtmann, “combines the splendor of the 18th century with the most innovative modern comforts.”

Continue reading the article after our video

The rooms and suites, including or perhaps especially the Penthouse Belle Etoile, are glamorous, not garish, refined but comfortable. “The technology is absolutely user-friendly, and everything has been thought out to make you feel at home. [you’re in] a stunning Parisian apartment with shimmering fabrics,” says Holtmann.

Indeed, you won’t find outdated USB ports for your device cables, which the stellar housekeeping team neatly roll up for you when not in use, and those shimmering fabrics mentioned by Holtmann? More than 170 different ones are used to dress the windows, furnish the living rooms and add to the inimitable aspect of the property.

Holtmann, an energetic workaholic who expects the same from her team, albeit within reason, considered every detail of the hotel, and then some. Where far too many five-star properties overlook seemingly minor things like a decent hairdryer and drinkable coffee in the room, Le Meurice, under the watchful eye of Holtmann, refuses to provide anything less than the standard. ‘Excellency. Along with the high-quality Baby Bliss hair dryer and Nespresso machine (you won’t find the now ubiquitous Keurig in these parts), no guest room is ready for its close-up until it has not been adorned with a vase of fresh golden flowers.

Whether or not guests recognize the laudable list of highly accomplished names responsible for outfitting Le Meurice’s carefully redesigned spaces shouldn’t matter in appreciation of the aesthetic, eclectic touches like the lobby’s Iberius cubes by Fausto Salvi, an Italian artist. 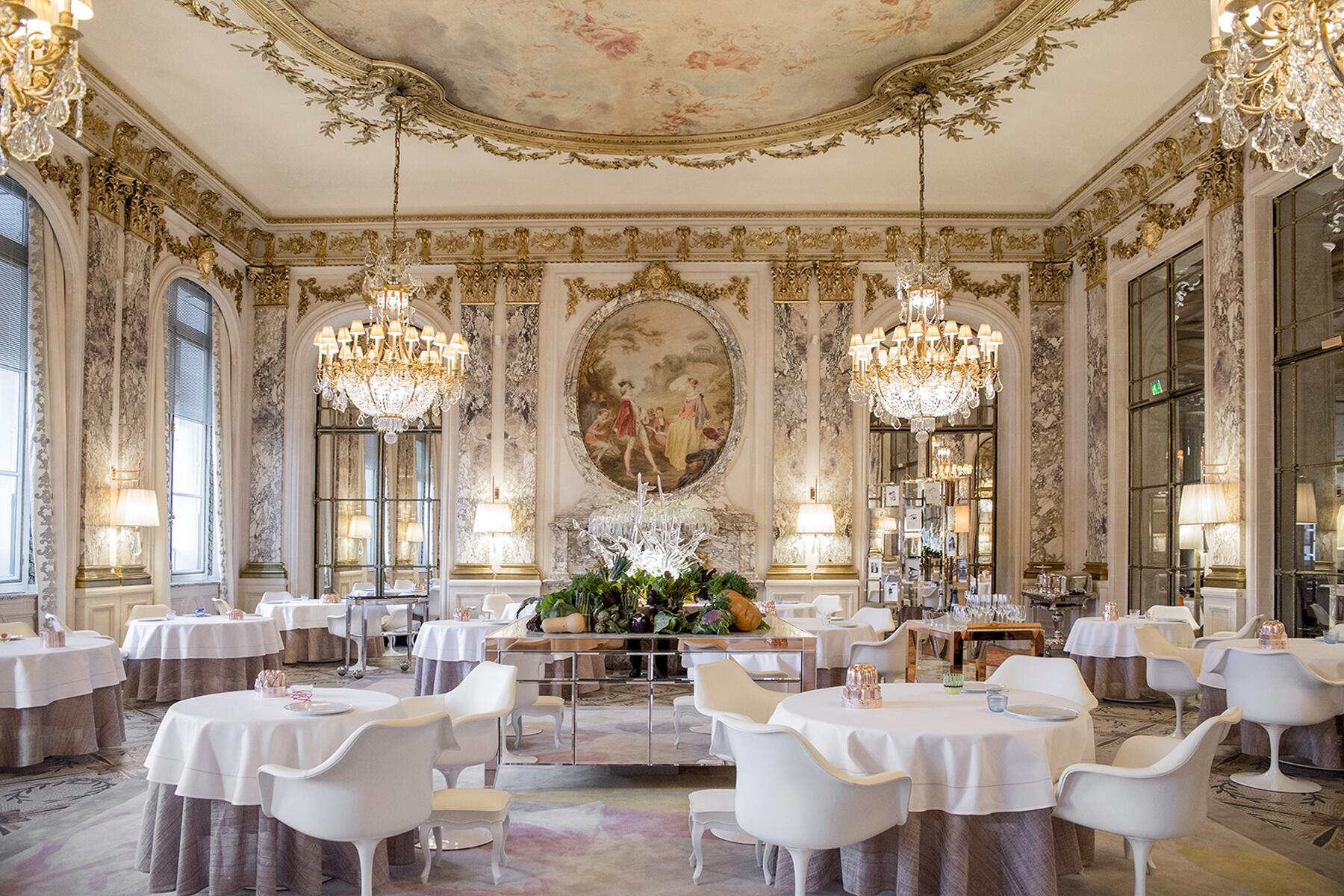 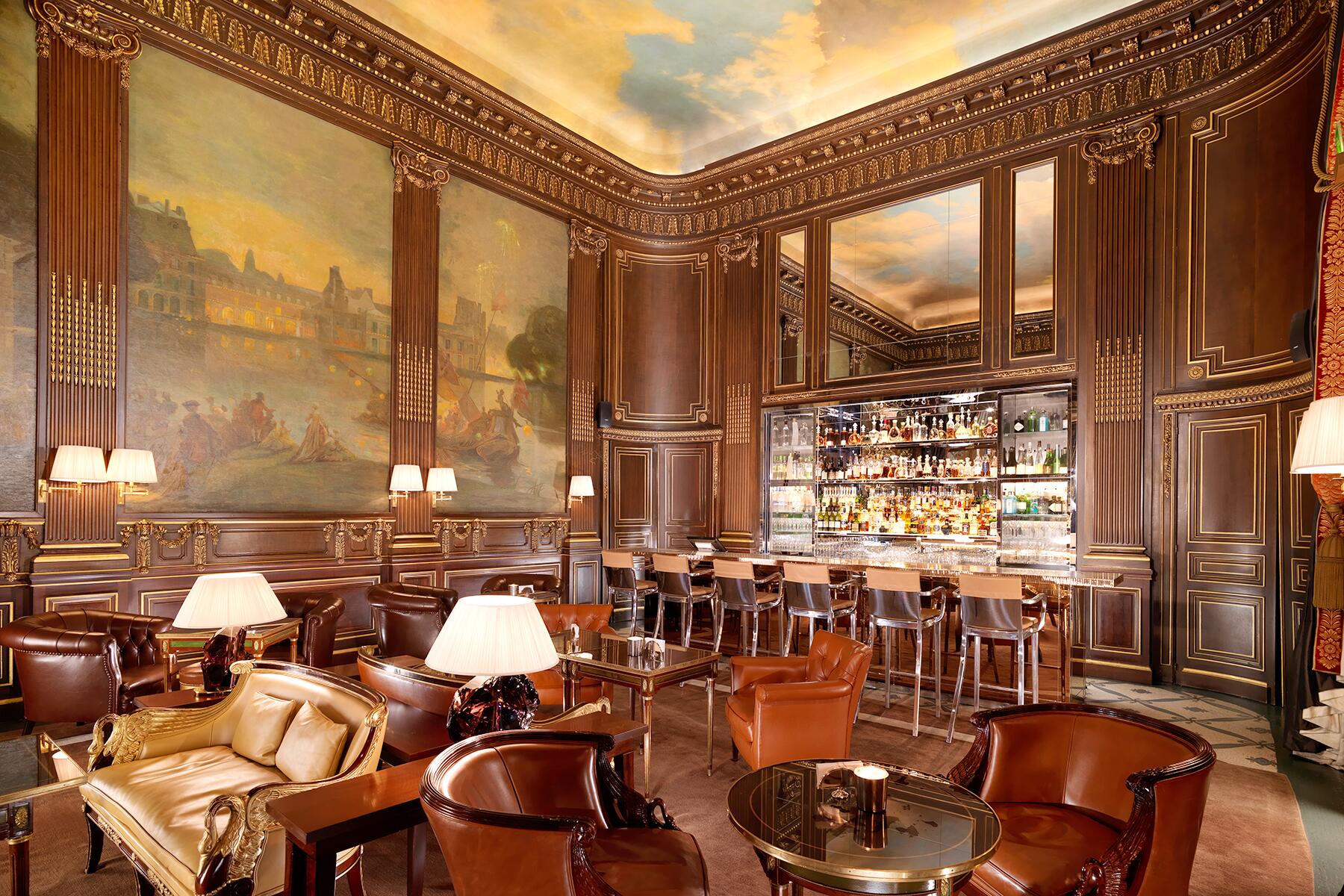 Esteemed designer Philippe Starck, enlisted in 2007 to oversee the hotel’s redesign, was chosen to create a playful and whimsical interior, a nod to surrealist artist Salvador Dali who often stayed at Le Meurice from 1950. In addition to Starck, Holtmann says the plan “was to bring together the best French craftsmen to do the renovations…hand-painted wallpaper by Gournay, stained-glass windows by Duchemin and bespoke furniture by Charles Jouffre.

Despite recent changes and dazzling artwork at Le Meurice – currently 17 pieces are on site, from Zoulikha Bouabdellah’s “Le Baiser” statue in the lobby to the glass-enclosed mirrored fireplace in the main hall – many original details, like the small elevator just past the reception inspired by the sedan chair used by Marie Antoinette in the 1700s, also let the history of the palatial space shine brightly.

Maintaining the integrity of Le Meurice was a crucial consideration in the redesign. Holtmann says the pandemic (and accompanying ever-changing travel restrictions) has led to an increase in French and European guests who, according to Holtmann, “have rediscovered the hotel in a different light…always with its sumptuous and authentic style”.

Funky art meets exceptional hospitality (one of Le Meurice’s long-standing hallmarks), offering spacious yet comfortable suites adorned with perhaps the most comfortable bed known to humans, marble bathrooms from floor to ceiling and the only Valmont spa in town. All of these attributes serve to create an unparalleled guest experience, but what’s a true luxury hotel stay without a Michelin-starred multi-course meal?

Certainly, Le Meurice’s cutting-edge food and beverage program is an integral part of the hotel’s reinvention. Although Alain Ducasse has been overseeing the culinary side since 2013, it wasn’t until 2020 that Ducasse appointed a young chef named Amaury Bouhours. Entrusting the 32-year-old with the task of injecting new life into Le Meurice Alain Ducasse restaurant, Holtmann said: “The food concept has been completely revised to make it more appealing. Based on the basics of Alain Ducasse’s cuisine and the best French products, Amaury gives free rein to his imagination by always creating creations corresponding to the seasons.

Participating in the tasting menu is living a theatrical experience associated with this type of high-end catering. A delicious piece of lightly cooked Noirmoutier gilthead sea bream, placed on beets and rose hips, is served on an ice cream pillow that serves as a plate. Asked about the extraordinarily unique presentation, Bouhours jokes, “it was cheaper than buying more plates.”

Bouhours’ sense of humor belies an intense work ethic. Long days at the helm of a kitchen of more than a dozen diverse young chefs are the norm, and creative freedom, with Ducasse’s approval, victory. Holtmann considers Bouhours and his team to be instrumental in providing the dining experience, even of this caliber, “a modern, uninhibited air” in which every guest “can feel comfortable”.

For total immersion, you must head to the heart of the hotel, Bar 228, where ordering the French classic, a Boulevardier, is never a bad idea. If you fancy something more fancy, maybe a glass of Dom Pérignon? This is one of the few places in all of Paris where champagne can be ordered flute by flute.

The most exciting hotel openings in Paris that we must expect

[ad_1] You might not be able to travel now, but you can expect extraordinary Paris hotel openings later this year. Cheval Blanc Paris Expect breathtaking views of the river and the Eiffel Tower from Cheval Blanc Paris. White horse The new Maison of the Cheval Blanc collection should open its doors by the summer. This […]

[ad_1] The George V hotel in Paris is an establishment of exceptional high hospitality in a city that abounds in it. It has been without a host since the start of the Covid-19 pandemic, but that will change later this month when it opens its golden doors again. Following the reopening of its Michelin-starred restaurant, […]

The Parisian hotel revolution has arrived, here’s where to stay

[ad_1] Madame Rêve occupies about a third of the vast building of the central post office in the rue du Louvre. Most Parisians from a certain age will have a story to tell you about this place. Until it closed for renovation ten years ago, it was the only post office in the country that […]